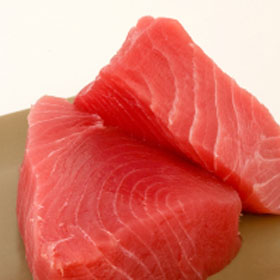 What is it? Most of us know tuna as the fish that comes chopped up in a can. But despite canned tuna's popularity, this fish is far from being the sea's answer to chicken. Before making it to your plate, many tuna lived their lives as large (up to 700 kg), carnivorous, quick-swimming, far-roaming residents of ocean and seas. Some tuna race through cold waters, while others make their home in the warmer water areas of the Mediterranean Sea and the Pacific, Atlantic, and Indian Oceans.

What is it good for? Four ounces of tuna has only 157 calories, but it packs in loads of nutritional benefits. Our body's tissues rely on protein and the antioxidant mineral selenium, which can both be found in fish like tuna. Dine on tuna to meet a majority of your daily requirements of vitamins B1 and B6, which support proper functioning of your circulatory, immune, and nervous systems.

Another B vitamin abundant in tuna – B3, also known as niacin – may help to stave off cognitive decline and Alzheimer's disease. This, along with its omega-3 fatty acid content, makes tuna a big-time brain food. Omega-3 fatty acids can help maintain healthy heart function, help to lower cholesterol, and aid blood flow to the brain, an effect that may reduce stroke risk as well. And that's not all for omega-3s! Eating omega-3-rich fish like tuna may protect your eyes from cataracts and macular degeneration and lessen inflammation associated with arthritis.

What does it taste like? If you've only ever tried tuna from a tin, you're missing out on the dense, meaty texture and taste of the fresher fish. Whether it comes in deep pink or rich red, in a full steak, chunks, or fillets, tuna takes on the flavours added to it while maintaining its own mildly fishy essence. Grill it or bake it with an olive or mustard spread or simply drizzled with lemon juice; it's hard to mess up tuna because it mixes so well with so many flavours and spices. Canned tuna will taste a bit different depending on what it is packed in. Oil-soaked tuna may be moist, but it's also higher in fat. Opt for water-packed tuna instead.

A note about choosing tuna: Choose whole tuna that has been buried under ice, or fillets and steaks that have been displayed on ice. Do a sniff test to make sure there is no strong "off" or "fishy" smell. Avoid tuna with dry or brown spots.

How to handle and store: Like any fresh fish, tuna must be handled with care.

Safety warnings:
Allergies: Seafood is one of the 9 most common food allergens, and people who are allergic to one type of fish are often allergic to other types. Signs of a reaction include hives, red and itchy skin, swelling of the face, eyes, lips, tongue, and throat, trouble breathing, and even loss of consciousness.

Mercury: Almost every type of fish contains mercury, a naturally occurring metal. When consumed in high enough quantities, mercury can impair nervous system functioning. Since the nutritional benefits of eating fish outweigh the risks, Health Canada advises that most people can eat up to 150 g of certain fish per week (fresh/frozen tuna, shark, swordfish, escolar, marlin, orange roughy). Certain age and gender groups are advised to eat even less of those fish: