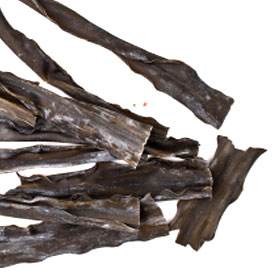 Sea vegetables float on waves, sprout on rocks, and weave through coral reefs. Some even thrive deep beneath the surface of the water where just enough sunshine can reach.

These are no normal vegetables, though. Neither plant nor animal, sea vegetables actually fall into the category of algae, and thousands of different types grow and flourish in oceans, lakes, and seas. Cultures living along these waters have enjoyed the mineral-rich flavours of sea vegetables for thousands of years. While the most common types spring from the seas around Japan, similar algae bloom in the Atlantic and the North Sea and feed the coasts of Scotland, Ireland, and Norway. The Pacific Ocean does the same for places like New Zealand, the Pacific islands, and the coastal towns of South America.

Often ignored or regarded as a nuisance - tangling round your legs in the surf and clogging beachfront spaces with long tendrils of rubbery, squeaky seaweed - sea vegetables provide a mineral-rich food source for many. Most varieties of sea vegetable soak up loads of minerals from their environment. When eaten, they supply significant amounts of iodine, which supports healthy thyroid function. Their abundant folate and magnesium could benefit heart health. They are also a good source of iron and calcium. And lignans, plant nutrients found in some sea vegetables, have potential benefits as cancer-fighters and may help reduce menopausal hot flash symptoms.

Sea vegetables usually find their way to market in dried form. Cooks seeking a savoury, salty flavour (known as umami in Japanese) will chop the vegetables into thin strips and sprinkle them onto salads or re-hydrate them to add to soups. Sushi chefs roll sheets of nori around rice and fish, and many a bowl of miso swims with wisps of wakame.

Dive in and sample a few of the more common types of sea vegetables:

Nori: Nori begins in the sea as a deep purple weed and then gets dried and flattened into paper-thin sheets. Sometimes it will be toasted. Once flat, nori provides the wrap for sushi maki and hand rolls. It can also be cut or crumbled into flakes to be mixed into soups and salads.

Kelp: This sea vegetable can grow to lengths of 60 metres, ranges from light brown to dark green, and comes in many varieties.

Kombu: Kombu turns up in over 300 products in Japan, including teas, condiments, and soup stock.

Wakame: If you have had miso soup, you may recognize wakame. This kelp has a mild, slightly sweet flavour and a slippery texture.

Arame: This delicately flavoured sea vegetable grows on underwater rocks in brown lacy strands and has a firm texture.

Dulse: Reddish in colour, soft in texture, salty and spicy in flavour, dulse crops up on the coasts of the North Atlantic Ocean. It's used as a condiment and as a medicine in Ireland, Iceland, and some spots in coastal Canada. Dulse, sometimes called dillisk, can be sun-dried, ground into flakes, fried into chips, or used to enhance the flavours of soups and stews.

Hijiki: The wiry black fronds of hijiki bear a strong flavour and a notable health risk. Trace amounts of arsenic are naturally found everywhere, including sea vegetables, and exposure to low levels is not a health concern. But compared to other sea vegetables, hijiki soaks up the most arsenic from sea waters, causing higher risk or arsenic exposure in people who consume hijiki. Because arsenic is a suspected carcinogen and because it can cause so much damage to the body, hijiki should be avoided.