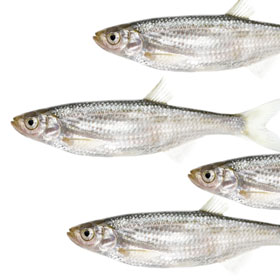 What are they? When most people think of sardines, they think of being "packed like" them. Or they picture that tiny rectangular tin that you have to open with the turn of a church key or the tug of a pull tab.

Think outside the tin can and picture this instead: a flickering, roving school of millions of small, silvery-scaled fish. Named after the Mediterranean island of Sardinia, sardines travel together in schools throughout the world's seas and oceans, reproducing quickly and "filter-feeding" - eating plankton and fish larvae as they swim and swim and swim.

Since they're small, sardines are trickier to cut into steaks or fillets than, say, tuna or salmon. This can make some folks squeamish about eating them as-is; they just look so... fishy. But once you know how nutritious sardines are, it's easier to get hooked!

What are they good for? You may pick out the bones before you nibble on sardines, but your own bones will get a big boost. Sardines contain lots of calcium and vitamin D, which work together to fend off bone loss and osteoporosis. Sardines also boost energy by providing plenty of protein, iron, and vitamin B12 per serving, but with less saturated fat than other animal food sources. And in the place of that bad fat, you get good fat - in the form of omega-3 fatty acids. Omega-3s support heart health by helping to lower cholesterol and blood pressure.

What do sardines taste like? Bite into the fatty flesh of sardines, and you'll taste a strong salty, fishy flavour and a tender, juicy texture. They can be barbecued on the grill, fried, baked, sautéed, smoked, cured, pickled, or eaten straight out of the tin. Chopped up, sardines can be added to pastas, stir-fry, ceviche, or omelettes, or rolled into sardine patties. Slice up sardines to top a homemade pizza.

A note about handling sardines: Fresh sardines don't travel well and only last a couple of days. So unless you live near the source it's not easy to get your hands on fresh ones! If you do, remember that like any fish, sardines must be handled with care. Wash your hands before and after touching. To store, place one layer of sardines in a dish, cover with a damp paper towel, and stow it in the chilliest spot in the fridge. With the canned variety, simply rinse the sardines before using. Once the can is open, any sardines that are left should be wrapped and kept in the refrigerator.

Safety warnings:
Allergies: Seafood is one of the 9 most common food allergens, and people who are allergic to one type of fish are often allergic to other types. Signs of a reaction include hives, red and itchy skin, swelling of the face, eyes, lips, tongue, and throat, trouble breathing, and even loss of consciousness.

Purines: People with gout or kidney problems should limit or avoid sardines, since they contain a large amount of purines. Purines are organic matter found in all living things, but certain foods we eat have much greater amounts. When broken down, purines can form uric acid, which aggravates these conditions.

Mercury: Almost every type of fish contains mercury, a naturally occurring metal. When consumed in high enough quantities, mercury can impair nervous system functioning. Since the nutritional benefits of eating fish outweigh the risks, Health Canada advises that most people can eat up to 150 g of certain fish per week (less for children and for women who are or may become pregnant, or who are breast-feeding). But since sardines are so small and often caught young, they contain very, very low levels of mercury, which makes them safer. Health Canada's advice on mercury in fish doesn't apply to sardines - only to fresh/frozen tuna, shark, swordfish, escolar, marlin, orange roughy, and canned albacore tuna.