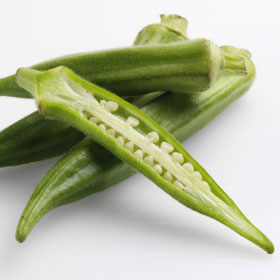 What is it? It looks like a vegetable - green, peapod-like - and it's eaten like one, too. But the part of okra that we eat is actually the seed pod of a leafy flowering plant that originated in Ethiopia. Okra grows forth as a green Aladdin's-slipper-shaped pod. Beneath the peach-fuzzy skin you'll find a cluster of creamy seeds that pop when bitten. When it's cooked, you'll also find a gooey, gelatinous juice oozing from the skin and surrounding the seeds inside. This viscous fluid actually gives okra one of its most defining culinary characteristics: It's a thickening ingredient that adds heft to soups, curries, and the signature Southern dish - gumbo! Gumbo is also one of okra's alternative names, along with ladyfinger and bhindi.

What is it good for? Like most fruits and vegetables, okra is low in calories and sodium and contains no fat or cholesterol. Slice 8 pods of raw okra into a salad for 12% of your daily fibre, soluble and insoluble, for better heart and digestive health. You'll also get loads of vitamin power in the form of folate, B6, vitamin A, and a third of your recommended daily intake of vitamin C. Okra provides calcium, iron, and the phytochemical lutein, which supports healthy vision.

What does it taste like? Okra bears a flavour resemblance to eggplant and sometimes stands in for it in recipes. Though its taste is subtle, okra's texture can lend either a hearty snap when eaten raw or a gluey cohesion when cooked into a stew of meat or vegetables. It's a popular addition to Indian, Pakistani, and Caribbean cuisine. Okra mixes well with corn, tomatoes, and sweet peppers, and thinly sliced raw okra tops adds crunch atop salads. The leaves of the plant can be prepared just like dandelion greens or beet greens. Pickled okra often turns up on crudités platters and relish trays in the Southern US alongside butter pickle rounds and sliced radishes. Fresh okra should be refrigerated dry and unwashed and stored loosely in perforated plastic. Plan to eat it promptly, though, because it will only keep for a few days.