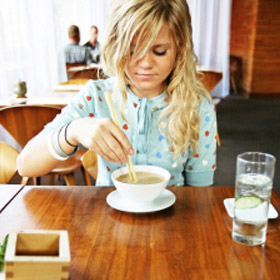 What is it? Miso is a mixture of salt and fermented soybeans. Customarily sold in a thick paste-like form, miso has been used as a flavouring agent in soups and in sauces for centuries. In Asia, the craft of preparing miso is esteemed in the same way that cheese- and winemaking are in other parts of the world. While most miso contains fermented soybean (hatcho miso), other types include white or brown rice, barley, buckwheat, or ginger. You will likely find it in the Asian cuisine aisle of the market, or possibly in a refrigerated section. Once opened, miso must be stored in the refrigerator in a tightly sealed container.

What is it good for? As a spice or flavouring, miso is low in calories and fat, making it a healthier alternative to butter in some recipes. Like yogurt and other fermented foods, miso is probiotic, meaning it contains "friendly" bacteria that support healthy digestion and immune function.

And like other soy products, miso has been purported to have cancer-preventive elements. It has also been suspected of increasing the growth of breast cancers in people who already have breast cancer, however. At this point, there is not enough scientific evidence either way to make recommendations. What is known is that miso is a good source of trace minerals, including zinc and manganese, and that it is quite high in sodium. Eye the label and try to avoid additives like monosodium glutamate (MSG).

What does it taste like? The colour of miso indicates the power of its flavour; white is the mellowest and least salty, while the darkest miso can taste intense and very salty. Though it looks a bit like butter, miso does not share butter's flavour - or fat. It can be a lower-calorie stand-in and give a dish a rich, salty taste. Miso is not meant to be eaten on its own, but rather as an additional flavour for soups, sauces, stir-fries, or any other dish that needs a salty zest. When stirred into a pot of boiling water, you create the Japanese cuisine staple, miso soup. Toss in small cubes of tofu, scallions, mushrooms, or bits of seaweed to add bulk.