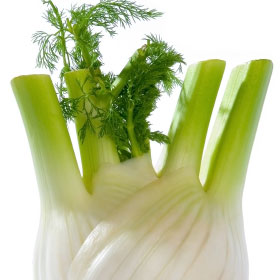 What is it? Fennel is a tall, hardy plant with stocky bulbs, hollow stems, and feathered, lacy fronds. It originated along the shores of the Mediterranean and belongs to the same botanical family as parsley, carrots, dill, and coriander. Fennel also has something in common with the more powerfully flavoured anise and star anise: all contain anethole, the compound that lends each plant a distinctive licorice-like flavour. You can generally find it in the market near the celery, often with the feathered fronds lopped off.

What is it good for? One cup of fennel provides good portions of your recommended daily intake of fibre, folate, and potassium.Fennel contains nearly 20% of the vitamin C you need each day, too. In laboratory studies, the compound that gives fennel its licorice taste also gave it the potential to fight inflammation and the formation of cancer cells.

What does it taste like? As mentioned above, fennel tastes like a cross between celery and black licorice. But don't wince! It's actually much mellower than it sounds. And considering the whole fennel plant is edible, it's a versatile vegetable to keep around throughout its peak seasons (autumn to early spring). You can chop the heavy, white bulb and add it raw to a salad for a slightly sweet crunch. Or you can braise it, sauté it, grill it, or roast it. No matter which way you cook the bulb, its crispy texture will soften and its flavour will mellow. To slice the bulbs, stand the vegetable on end and cut vertically. Treat the crisp, hollow stalks the same way you would celery, adding them to soups and stews or enjoying them raw with veggie dip. And the wispy fennel fronds can be chopped up like a herb and added as a garnish. It's a little harder to find fennel seeds, since they're usually not included with the type of bulb fennel you find in markets. If you do find some, toss the aromatic, anise-flavoured seeds into tomato sauces or use them as a seasoning for meat or fish.