How do I know if I have herpes?

It is difficult to paint a single picture of what herpes infection is like. The symptoms depend not only on the severity of infection but also on its site. For the most part, herpes simplex prefers mucous membranes, where the skin is thin. These include areas like the labia (lips) of the vagina and the lips of the mouth. However, any area of the body may be fair territory for herpes.

When genital sores erupt, they usually do so at the site where the virus took hold, which is usually on the external genitals. Sores generally look like a cluster of small blisters filled with clear or whitish fluid. The classical herpes sore is just this: a group of small blisters (vesicles) on a red base of inflamed skin (see Figure 1). 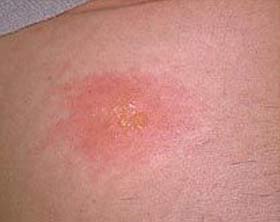 One example of a herpes sore: vesicles clustered on a swollen red base on the thigh.

In many cases, these blisters are never seen, and the first signs of infection are small erosions of the skin called ulcers. Ulcers also tend to come in clusters or groups. They may feel like chafing of the skin or some other irritation. Genital herpes may never be more severe than one very small sore on the labia or foreskin, around the anus, or on the thigh. It may be the size of a pencil eraser or as small as the sharpened lead point. The sore or chafing may never be painful at all and may not even itch.

In women, herpes sores or lesions are usually on the external genitals, most commonly on the labia (lips) of the vagina. Another common site is the area covered by pubic hair. In men, sores are usually on the foreskin or the shaft of the penis or in the pubic area, but the glans (tip of the penis) is also possible territory. More than one of these areas may be affected during primary herpes. Sores may vary in size from very small (1 mm to 2 mm) to very large (1 cm to 2 cm). There may also be sores in other areas, such as the mouth. If oral contact occurred with the same sores that infected your genitals, a mouth infection may result. Rare sites of infection are the fingers, the breasts, and the eyes.

If you think you may have herpes, go to your doctor or clinic as soon as possible and have a trained professional diagnose the problem and confirm the presence of herpes by a virus test taken from the affected area. A culture test (where the doctor collects a sample of fluid from a herpes sore and incubates it to see if the virus will grow) is the most common method, but a blood test for antibodies may also be used. Early diagnosis and treatment will help you to feel substantially better more quickly.

Primary herpes infections may cause anything from no symptoms to painful sores, sore throat, headache, and muscle pains. Infection may be much more severe because the body has not yet developed a specific immunity to herpes. More sores will usually develop, especially in women. The person may feel generally sick, usually with a flu-like illness that feels very much like any other viral infection, causing muscle aches and pains and possibly fever and headaches. Often the lymph nodes are swollen in the groin region. For other people, however, primary infection will actually pass entirely unnoticed or will cause symptoms or signs that are atypical and may be readily misdiagnosed. An atypical primary infection, for example, could produce only a small amount of vaginal discharge, some difficulty with getting urination started, leg pains, headaches, or vaginitis of unknown cause. A woman may only find out she is in the midst of a primary infection when a routine Pap smear comes back showing active cervical herpes.

Symptoms will usually disappear within 2 to 3 weeks. The ulcer-like sores eventually scab over and the dry crusts fall off. This marks the end of the primary infection.

During the first infection, it appears the herpes virus travels up the nerve fibre until it gets to the body of the nerve cell and remains there in a quiet, or latent, infection that persists and may reappear later as an active outbreak on the skin. Latent infection inside the nerve body (the ganglion) does not hurt you, and it is not curable by any medication at present.

There is no way to predict who will have a recurrence - another active outbreak - and who will not. Most people will have at least a few. For some people, recurrences get milder and less frequent with time. People with recurrent herpes often have few or minor physical ailments during recurrences. There are usually few sores and these are much less uncomfortable, and recurrences usually do not last as long as the first outbreak.

Assume that any break in the skin in a previously affected or related area is herpes unless you know otherwise. People commonly confuse herpes with other things, especially before they get to know their herpes. Herpes is often misidentified as a spider bite, especially on a leg or buttock or in an area remote from the genitals; a yeast infection; a hemorrhoid; pimples (on the buttocks, labia, etc.); shingles; water blisters; or cuts, slits, or chafing of the lips of the vagina caused by friction or soreness from vigorous contact. If you think you may be having a herpes recurrence, you might want to avoid sex and skin-to-skin contact with the affected areas until you've checked with your doctor. Medications are available to help relieve symptoms, reduce the risk of recurrences, and decrease the risk of transmitting herpes to others.