Now tattoos can be removed fairly easily using lasers. Before the early 1990s, tattoo removal procedures included surgery, with or without skin grafting, dermabrasion (sanding the surface of the skin), salabrasion (rubbing the skin with salt), or covering of the original tattoo with another tattoo. Now, however, a powerful laser is available that can destroy and remove unwanted tattoos.

The laser procedure uses repeated high-powered laser pulses that each last for less than a millisecond. Each pulse destroys the ink molecules within the skin. The skin containing the ink will blister and peel in response. Although many of the ink particles remain in the skin, they are so small that they can't be seen.

Yes, there is some pain involved

This is not a painless procedure. It's painful to get a tattoo, so as one might expect, there is some pain involved in getting it removed. Although most patients don't require an anesthetic, some prefer a locally applied anesthetic or local injections to numb the skin.

During the treatment, the patient's tattoo is gradually "pulsed" by the laser until the entire tattoo is covered. The skin turns white at first, but after a few minutes, returns to normal. Over the next few days, the skin blisters or peels. The crust comes off, and the skin will remain red for a few days to weeks. An antibiotic is applied to the skin to protect it from infection.

The number of treatments needed to remove a tattoo depends on the type of tattoo, skin colour, and colours used in the tattoo. 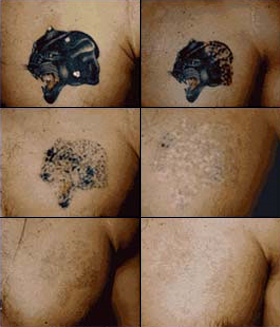 Almost any tattoo from almost any area of the body can be removed if enough treatment sessions are given (see Figure 1).

Although all colours can be removed or faded, some disappear more easily than others do. Black and very dark colours tend to come out most easily, while the most difficult colour is green. Black lines can be removed much more quickly than solid, multi-coloured tattoos.

Cosmetic tattoos such as lip-liner or eyebrow tattoos also tend to respond well. Nevertheless, there are some colours that can never be removed completely, in spite of numerous laser treatments. Professional tattoos can take 4 to 10, or more treatments to clear. Amateur tattoos are easier to remove, taking only 2 to 4 treatments.

Results are best on untanned and light-coloured skin. Dark and tanned skin absorbs the laser light in the same manner as the tattoo, creating less ideal results.

Tattoos on the upper part of the body tend to respond better to laser removal than tattoos below the knees.

Lasers are also effective in removing "road rash" tattoos caused by scraping the skin from a fall or accident, where dirt is embedded into the skin.

Other types of accidental tattoos that show good results from laser are those from gunshots, pencil leads, paint, and severe nicotine stains on the fingers. Sunspots respond very well to the tattoo lasers also.

What are the side effects?

It is important to note that lasers do not cause cancer. Most lasers are less harmful than sunlight.

Some possible side effects include infection (in less than 5%) and scarring (in less than 1%). Darkening of the skin (hyperpigmentation) is quite common, but disappears. Lightening of the skin (hypopigmentation) is less common, and is usually preventable by waiting longer between treatments. Lightening is caused by destruction of the normal pigment in the skin.

Darkening of certain light ink colours such as white and beige can frequently occur. Tattoo artists often use these colours in attempting to cover up an unwanted tattoo. Because these light colours can permanently turn quite dark or even black, they are tested before full treatment is given. Some colours are impossible to remove completely, even with several treatments from both types of tattoo lasers.